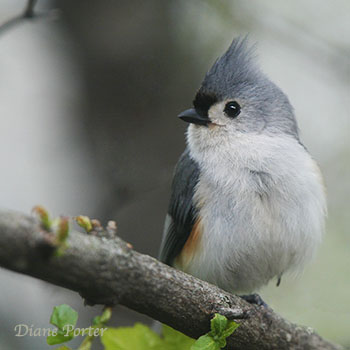 One morning last year, a certain titmouse began a quarrel with my living room window. It smacked into the glass.

This was not the sad blunder of a bird mistaking a window for blue sky. After the titmouse fluttered and scrabbled down the window to the walk, it did not fly away. It got up and dashed against the window again. And again.

The titmouse pounded the glass with its beak. It scratched at the window with its toes. I went outside to get the bird's point of the view, and I saw my own perplexed face gazing back at me. Of course! The titmouse was battling his reflection.

The season was spring. In the trees nearby, the mate of the titmouse would be building a nest. Hormones in the bird's blood impelled him to defend his territory. And there, just beyond the window glass, he spotted a rival. The little grey bird hurled himself toward the intruder with a piercing whistle.

The other ought to have flown away, for few intruding birds can withstand the fury of a male righteous on his own territory. But this intruder did not flee. It flew straight at him, and the two collided. Even then the intruder did not retreat. As soon as the titmouse righted himself, there was the other, facing him in a posture as inflamed and challenging as his own. The titmouse shrieked his protest and jabbed at the stranger with his small bill. The rival pecked back just as fast. Two beaks hit spot on, like hammers striking sparks against each other.

I lowered the rattan shade outside the window, but my titmouse was not placated. Around and around the house he searched, discovering his rival in one window after another. He didn't stop until dark. When I went into the kitchen the next morning, the titmouse was scuffling at the kitchen window.

"Give it a rest!" I told the little grey bird, because it pained me to see him waste his strength against the illusion.

The titmouse paid no attention.

I kept the outside shades down a lot, but my house has many other windows, and the titmouse found his rival everywhere. Going to my car, I saw him fly away from the side mirror, which was spattered with frothy saliva and small grey feathers. Some afternoons, he thrashed at the metal trim of our utility trailer. Showering, I saw him beating at the bathroom's small high window.

I know that cardinals and robins often fight their reflections in windows, hubcaps, and other reflecting surfaces, but usually they desist after a few days. I hoped the titmouse would get so engrossed in nesting that he would forget about the other in the window. However, his lonely battle lasted all through summer. And in fall my windows and the car's side mirror still needed washing every few days.

When winter came, the titmouse still resented his rival, though it seemed less violently than before. He attended to every window in the house, but the living room windows, near the feeders, occupied him most. Each time he came for a sunflower seed, he stopped by the window before or after going to the feeder. Sometimes he pecked at the glass. More often he landed close, peered into the face of the bird he saw there, and uttered a trill that sounded more musical than ferocious. Musical at any rate to my ear, fond as I am of the little grey bird.

I had never seen a bird fight its reflection in winter time, and I was curious why this titmouse was doing such an odd thing. Looking up some studies of tufted titmice, I learned that, unlike birds that migrate, tufted titmice live in small flocks in winter on the same territory where they will breed in spring.

After reading Tufted Titmouse, a delightful book by Dr. Thomas Grubb, I emailed the author and asked if he could shed further light on why this particular bird persisted in attacking his reflection in winter. Dr. Grubb replied that it was unusual behavior, but that the bird thought the reflection was another titmouse, and he attacked it to maintain his status.

As Dr. Grubb's book explains, in winter the dominant male titmouse of each flock chases and pecks at all other males in his territory and drives off any strange titmice that dare to drop in uninvited. His domineering behavior ensures that he will be the male titmouse that gets to breed on the territory in spring. Since year-around aggression is in his genes, now I see why the other in the window troubles him even in winter.

But not all tufted titmice go to war with windows. Does this particular titmouse have an extra dollop of aggression in his makeup? Is he brighter than average, for noticing his reflection in the first place, or is he a fool of a titmouse for failing to learn that the bird in the window is unreal?

Ah, well, enough about the folly of titmice. I have to go try on the new pants that the UPS truck brought and give that person in the mirror a good scolding about all those chocolate chip cookies.