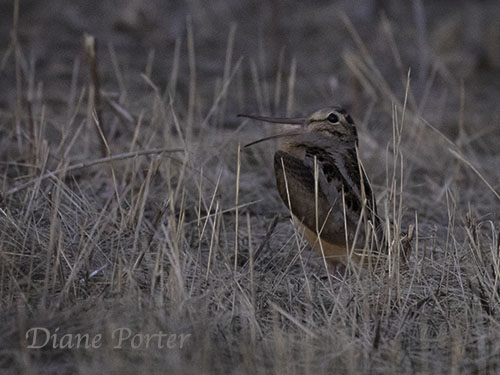 At the first hint of dawn, I’m standing outside, listening for woodcocks. I give it a few minutes, pulling my engulfing parka closer around me but leaving the hood down and my cold ears exposed. A barred owl inquires in the distance, but it seems the woodcocks still aren’t back. Maybe tomorrow.

As I’m turning to go back inside, I hear a nasal peent over in my neighbor’s field. And again, peent, a low but penetrating buzz, from a different direction. There must be two woodcocks.

I forgot to bring my flashlight, but I start wandering toward the nearer of the sounds. Suddenly, close now, and overhead, I hear a delicate, musical fluting. It is the unique sound of air passing between three specialized, narrow feathers on each wing of the male woodcock. A female must be here this morning also, to have inspired this performance. The male is making poetry with his wings. For love, for the sake of offspring, for the continuity of life.

Every year I listen for woodcocks in February. Last fall my husband mowed a round clearing amid an overgrown field, between the woods and our house. We hoped it would entice the woodcocks to display. I plan to be in that clearing this evening. I’ve set up my blind at one edge, where I can observe without being seen.

However, February has other plans. The snow starts in late afternoon. I get in the blind with hand warmers in my pockets and sit for an hour while the light at the openings grows smaller and dimmer, and the snow falls softly on the blind with a sound like the crackling of a fire.

The woodcocks do not call. Sometimes I think I hear the fluting of wings, but it’s only the wind. The train whistles, with its delayed echo off the bluff to the east.

My knees get cold, and I search my pockets for anything to put over them, a wool cap, a balaclava, a notebook. It grows dark. The light of half a moon seeps through the clouds. Snow falls and falls. I like being there in my blind in the dark. It’s cozy, though it’s hard to see out, and I can’t tell which direction the sounds are coming from. But it doesn’t matter, because no woodcocks display. Woodcocks do not sing in the snow. Now I know that.

The next day the snow melts, and the temperature rises. After sundown, I’m sitting out in the open at the edge of the clearing. This time, no blind. It’s almost too dark to see when I hear several woodcocks start peenting in the distance. Suddenly there is a rush of wings, and a woodcock hurtles in at a shallow angle and lands smack in front of me, facing my way. I don’t dare raise my binoculars. I try to be a weedy shrub. Maybe he hasn’t noticed me. 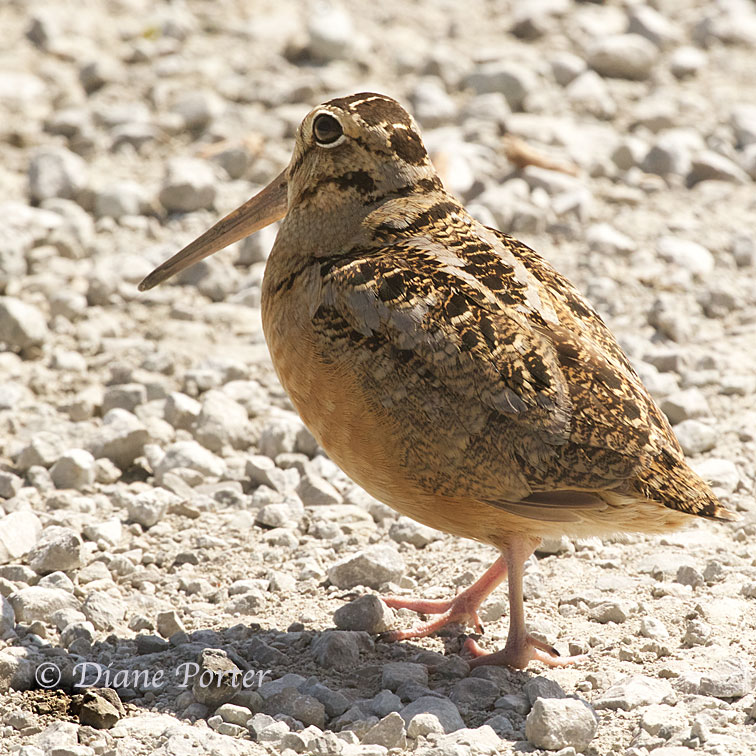 He’s an odd-looking bird, a miniature football, short tailed, big-footed, and with a bill so long I wonder how he holds it up. He takes a few deliberate dance steps, pumping his body up and down. Then he opens his long bill. Peent.

He takes a few more steps, pauses, pumps again. Peent. The peent comes out of him like a sneeze, making him rise up and then have to catch his balance again. Now he’s getting warmed up. Every few seconds, he peents, all the while turning slowly in a circle, like an actor at a theater-in-the-round, making sure that every listener in his audience has a chance to hear his unworldly, buzzy call. However, although I am a member of that audience, the performance is not for me.

Without warning, he takes flight. For a few seconds there is silence. Then I see him fluttering above me, spiraling slowly into the sky, higher and higher. The first sound I hear from him is a steady chittering. After a few seconds it begins to pulse, the pitch rolling. The sound changes. Now from the sky comes a music like the pipes of heaven, evoking in my heart a sense of weightlessness and wild joy. The wind instrument of his wing feathers is in full voice. 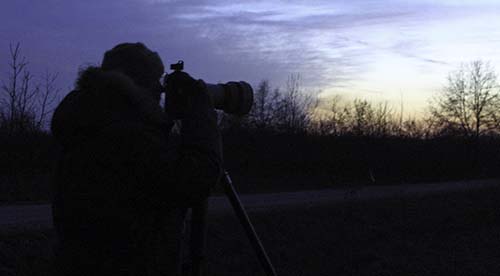 The next minute, he’s circling in, low. The fluting turns to chirping, with the pitch rising and falling. On final approach he stops making noise and comes in like an arrow aimed at the earth. He lands close to the place where he started. For a few seconds he is silent, and then he begins again. Peent.

After several complete performances, when with the naked eye I can barely make out the grass, my binoculars let me see the woodcock raise his wings and run toward the edge of the clearing. Another woodcock half hides there behind taller grass. He lurches forward, and the two birds melt into darkness.

I return to my house happy. Michael is reading in the living room. That clearing he mowed is turning out well, and I tell him all about the timberdoodles. “I’m thinking about making a chess pie for you, the one with black walnuts and raisins.”

Michael looks up from his book. “Peent.”