Indigo Buntings migrate guided by the stars. Here is how they learn the map of the sky 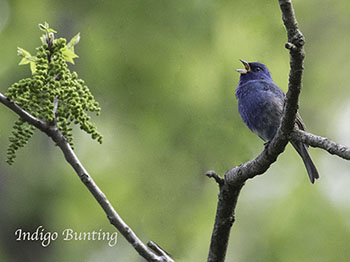 On a crisp fall morning I walked to the woods where I visited an Indigo Bunting all summer. His loud song of doubled notes, sweet sweet, chur chur, twip twip, would guide my eye to a brilliant, intensely blue little bird perched at the tip of a walnut tree.

This time, however, I did not find him. He was gone, as I'd expected. Gone to Central America, for winter days that would be longer and warmer than anything Iowa can offer.

New arrivals from the north console me — Purple Finches, a pair of Red-breasted Nuthatches, and a flock of Dark-eyed Juncos cheerfully throng my back yard. Though I haven't yet put seeds in all the usual winter spots, the juncos are already searching under the redbud tree, exactly where they found birdseed last winter. Clearly they recognize my yard. These are my own juncos back again. They are birds who winter in Iowa, and they're sorting out their addresses.

How do the birds know where to go when they migrate twice a year? When I travel, I need maps and road signs, and still I sometimes get turned around. But these little birds, with no such aids, have journeyed hundreds of miles and have come back to this very spot. 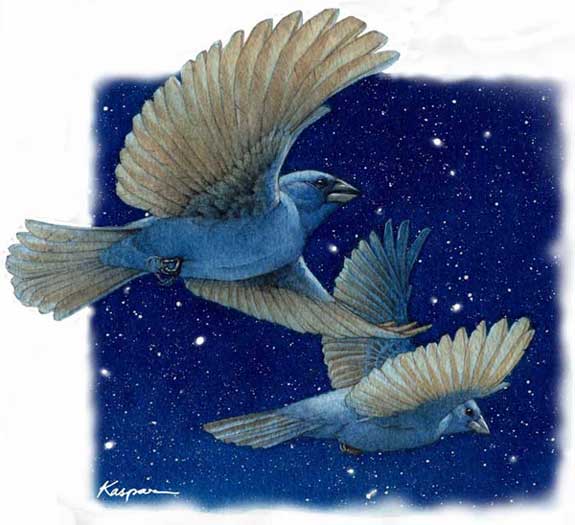 No one fully understands bird migration, but we've learned a little. Many birds navigate by the sun. Others use landmarks, such as lakes. Birds who migrate at night, however, must rely on darker devices.

Some birds start their education for migration while still  babies in their nests. How? They watch the stars. In 1967, ornithologist Stephen Emlen published his study of how Indigo Buntings learn to navigate. He raised baby Indigo Buntings in a planetarium. Instead of circling the Pole Star, Emlen's artificial night sky rotated about Betelgeuse, a star in Orion. That made the stars move slowest and arc most tightly around Betegeuse.

When his baby Indigo Buntings grew up, and the time for migration approached, they felt impelled to fly away from Betelgeuse. They behaved as if they had formed a concept of "south," as the direction opposite the place that Betelgeuse occupied in the sky.

Emlen surmised that outdoors in nature, baby Indigo Buntings in their nests spend their nights studying the starry sky. They notice that the stars close to the Pole Star move the slowest, tracing the path of a small circle around that star. From then on, the night sky is map and compass for them. And it will guide them on their migrations. 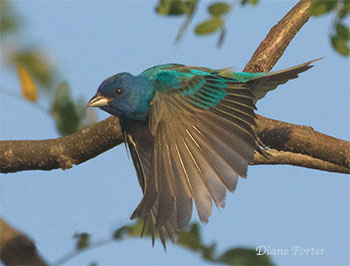 I love imagining a nest full of baby Indigo Buntings peeking out from beneath their mother's warm belly to drink in the night sky. I like to think of a young bird in fall, taking its bearings from the stars as it begins its first migration. It flies to the southern border of the U.S. and crosses the Gulf of Mexico, to a land it has not yet seen.

The next spring, relying on its internal astronomy, the young bird will come north again and find a home. A young male making his first migration north will not have all his brilliant iridescent feathers yet. There will be brown among the blue. By the end of the summer he will wear his magnificent blue plumage. Even this first year, though, he may be able to win a mate, and they will raise their own young.

I hope he will succeed. I hope that next May his bright song of doubled notes will pour down from a treetop at the edge of the woods near a small town in Iowa.