of a Soft-hearted Tree

To the Great Crested Flycatchers, the dying box elder was the best tree on the place.

It was a worthless tree, the old box elder at the edge of Crow Creek. It had been declining for at least ten years, bark sloughing off in places, bare branches of the crown craggy against the sky. Several big limbs broke off in a winter ice storm.

Nevertheless, the tree put out new leaves in spring. It was not close enough to house or car to do any property damage, so we let it be.

Question in the air

One morning, walking near the creek, I heard a loud, insistent cry from up in the box elder. Wheep?

The call rose in pitch like a question but had the emphasis of a command. A bird sailed out of the foliage and perched erect on a shattered branch. The bird's broad tail was cinnamon, its belly lemon custard. From behind me came another Wheep? and a similar bird landed nearby. 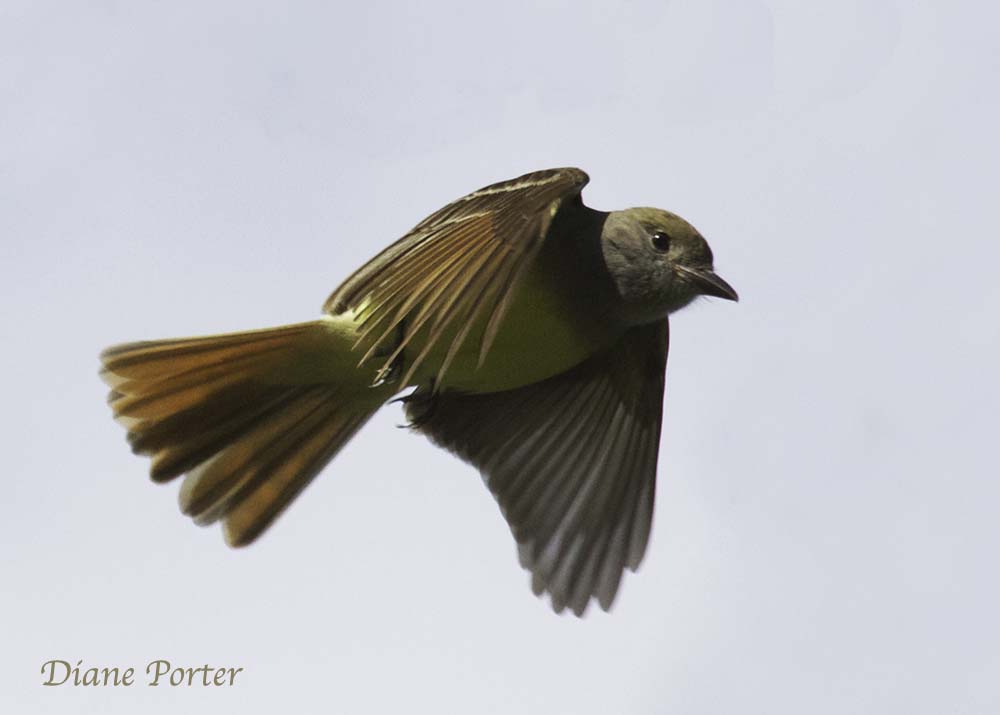 It was the closest look I'd ever had at Great Crested Fycatchers, and I felt pleased, almost as if it was to my own credit that the birds were here.

The two flycatchers took flight at the same moment. One chased the other around the trees and between limbs, in a lemon-and-cinnamon streak. Then one of the birds stuck its head into a neat, round hole I hadn't noticed before in the box elder. The other pushed past it and dived down into the tree.

I looked at the half-alive old tree, and my eyes opened a little wider.

Over the next days, the flycatchers carried dead leaves, string, and feathers into the hole. A few weeks later baby birds were crying for food from within their hidden nest. Both parents brought winged insects to the family in the tree. After the young fledged, our yard rang with the calls of the family, who trouped around together in the treetops of our neighborhood for several summer days.

I found reasons to go down to Crow Creek every day.

Where nest holes come from

In eastern North America, great-crested flycatchers (like the similar Ash-throated Flycatchers of the west) nest in cavities in trees. Although they haven't got the bills or muscles to do excavation work themselves, they use the holes that woodpeckers have created.

Woodpeckers don't go for perfect, healthy trees. They select dead or dying trees, whose heartwood has begun to decompose. After chiseling laboriously through the tough outer layers of bark and cambium, a woodpecker can easily dig out a sac-shaped hollow in the soft interior. Perfect for cradling eggs and young. In subsequent seasons, the woodpeckers create new nest holes, and other cavity-nesting birds inherit the abandoned ones. And that's what brought the great crested flycatchers to my yard. A hole in a worthless tree.

For a few more years the ancient box elder will beside Crow Creek. I think we'll let that tree stand a little longer. To some eyes the soft-hearted box elder might be unsightly. But as far as the birds are concerned, it's the best tree on the place.