Feathered in stone-cold black, grey, and white, the nuthatch is a ball of metabolic fire 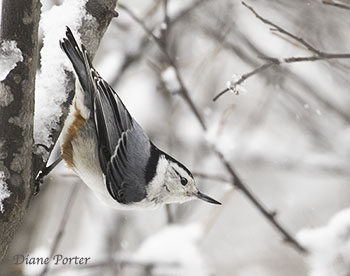 That's his trademark, hitching around in any direction, as if gravity had no effect on him.

He pauses to chisel loose a bit of bark, finds something interesting. His throat bulges momentarily as he swallows. I can tell this nuthatch is a male, because the top of his head is shiny black.

How thick is this bird's coat?

It's going to snow. My old down jacket isn't quite warm enough, and I'm starting to shiver. It doesn't seem possible for the nuthatch to live outside in such cold. I know he has a warm undercoat, made of small, fluffy feathers next to the skin, hidden beneath the outer contour feathers. I know he can fluff up the downy feathers to increase their insulating power. But still, the bird's whole body isn't as wide as the thickness of my coat.

I leave some black oil sunflower seeds on the wooden porch railing and go inside. Rubbing my hands together, I watch the nuthatch, from the warm side of my window.

He was waiting for those seeds. One quick swoop brings the nuthatch to the porch. He picks up a seed, drops it, and picks up another. Maybe this one's weight or hardness promises a better kernel, and he carries it back to the tree. He lodges the seed into a crevice in the bark, hammers the shell to pieces with his beak, and eats the nutmeat. 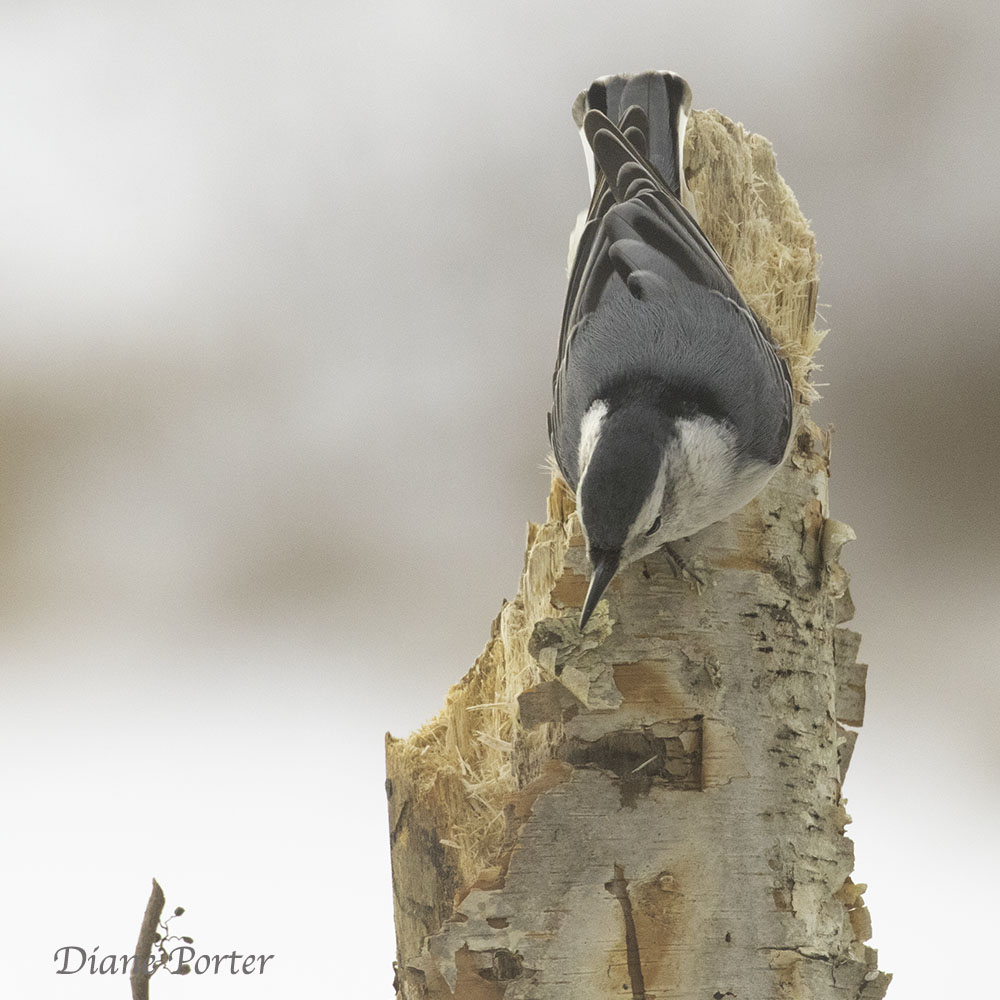 Nuthatch. Hatch means hack, as in hatchet. One who hacks nuts.

Another nuthatch squeaks in the distance. The female (whose crown is gray) and the male (with a black crown) talk to each other like this throughout the winter. But I seldom see them together. If the female is at my feeder when the male comes in for a seed, she flies off before he lands. If he is already at the feeder, she waits on the birch snag until he's done.

In March, however, the two nuthatches visit my feeders at the same time. At that time, the male will pick up a seed and place it in his mate's beak. For now, they keep their distance.

Yesterday the birds revealed the bond that unites them even in winter. Another male nuthatch landed on a tree near the feeder. Instantly the resident pair flew in from different directions and landed on the trunk. Side by side they rushed down the tree toward the intruder. Their short black-and-white tails were spread wide, so that the usually-concealed, battle-flag pattern showed. 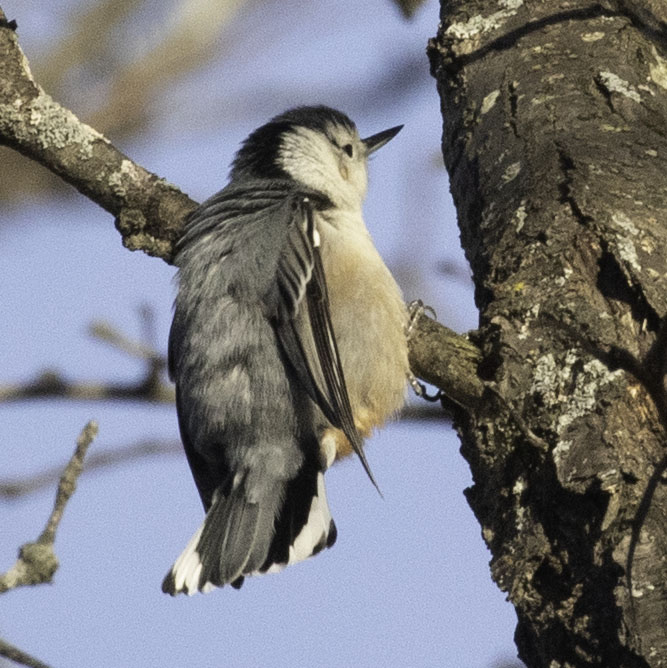 The not-from-here nuthatch departed in haste, and the resident pair drifted apart again. Vigilant protection of their territory is part of the nuthatches' strategy for surviving winter. Territory is food. Perhaps they are already planning ahead to next spring's nest, and the insect food they will need to feed their babies.

White-breasted Nuthatches don't retreat to the tropics each year, the way that swallows, warblers, and other small birds do. Those who leave are the ones who must depend all year around on insect food. When cold forces insects to go dormant and disappear, nuthatches can stay on their home ground and skip the dangers of migration. They change their diet to mostly nuts and seeds and devote themselves almost exclusively to food.

It's food that lets them generate heat as fast as the weather sucks it away. Feathered in stone-cold black, grey, and white, the nuthatch is a ball of metabolic fire. Its heart beats over 400 times a minute when it's resting. Perhaps three times that fast in flight.

Now the male is back at my porch for another sunflower seed.

Yenk! he declares, landing on my porch railing.

A gust of wind ruffles his feathers where wing joins body. I watch the first snowflake blow past him. The nuthatch picks up a seed, and instead of flying off with this one, he lodges it in a nailhead's depression in the wood and pounds at it with his beak.

Six strokes break the shell. He extracts the kernel, lifts his head, and swallows. I sense his satisfaction. The seed will fuel the fire that warms the nuthatch. Already that tiny flame is warming me.