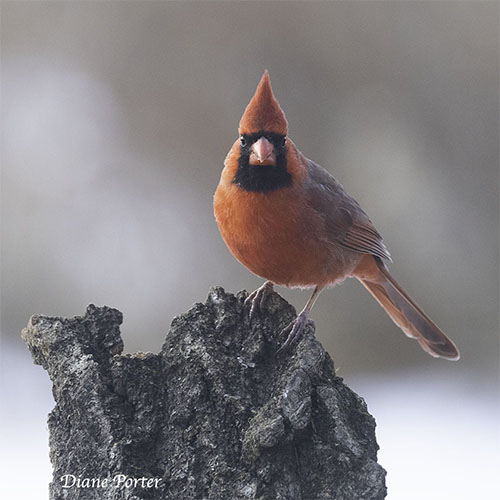 Sometimes you just wonder how nature comes up with shapes like the black patch around the bill of the male Northern Cardinal. Face on, it appears nearly square.

There must be some advantage to displaying this pattern. If it did not provide an advantage, the pattern would not be maintained generation after generation. Sooner or later, cardinals would no longer look this way.

Sometimes animals have a facial pattern that makes it difficult to notice the eyes. That helps them when they're trying to catch prey, because they can; get close before the prey realizes it's about to be eaten.

That's probably not the advantage to cardinals, because this bird is not much of a predator. It eats a lot of seeds, and seeds don't notice eyes looking at them.

Another possible advantage to the black patch is to protect the feathers around the bill. Black feathers are generally tougher than red ones. Black feathers stand up better to abrasion and perhaps to chemical stress. So does that black square protect the feathers from some caustic food the cardinal eats? I think this is possible, but it seems unlikely that a cardinal would need mouth protection more than other kinds of finches who don't share the characteristic.

The beauty of beauty

My best guess is that the advantage is beauty. We know that female birds often use esthetic judgement to choose a mate. They often pick their mates on the basis of color, pattern, or beautiful song. I find the color and geometry lovely. Apparently female cardinals feel the same way.

Nature is beautiful. Geometry is striking. And it seems that nature loves pretty.