The Wing of the Hawk 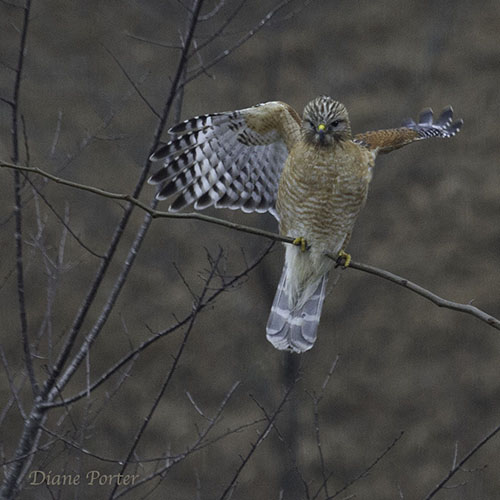 "Look!" Michael exclaims, pointing. And there the Red-shouldered Hawk again. It lands in a thicket of naked trees at the edge of the grassy field.

Although it is primarily a bird of woodlands, it likes to hunt the field next to our house. I often see it perching in the border between woods and field, just daring a vole, chipmunk, or other small mammal to show itself.

It also eats snakes, frogs, and crayfish when it can get them. It likes variety and will even eat earthworms.

If it spots its prey, it drops down on top of it suddenly and without warning. I think the little animals never see it coming.

The wing of the hawk

This is a very pretty hawk, more colorful than some other hawks in the same Buteo genus, with its rich russets on the shoulders and belly, and the dramatic barring of the wings. 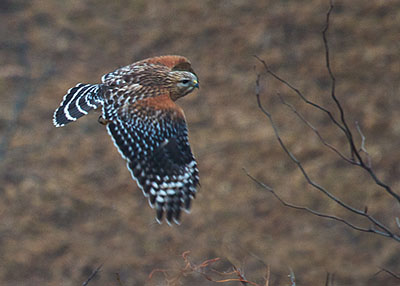 An adult Red-shouldered Hawk shows dramatic bands on the tail, with the wide black bands and narrow white ones.

There's also a light patch across the primary wing feathers that is conspicuous both from below and above. With the banded tail and the distinctive wing pattern, this is an easy hawk to identify.

It's a year-around resident in our woods. I think we're lucky to have them, because according to the map of the Cornell Lab of Ornithology it is found primarily in a narrow strip along the west coast and in states to the east, from which it barely extends west of the Mississippi.

Even if they were not unusual for our area, I'd feel lucky that a pair of Red-shouldedred Hawks chooses to share space with my family.